Why strategy is essential for any voice interface project 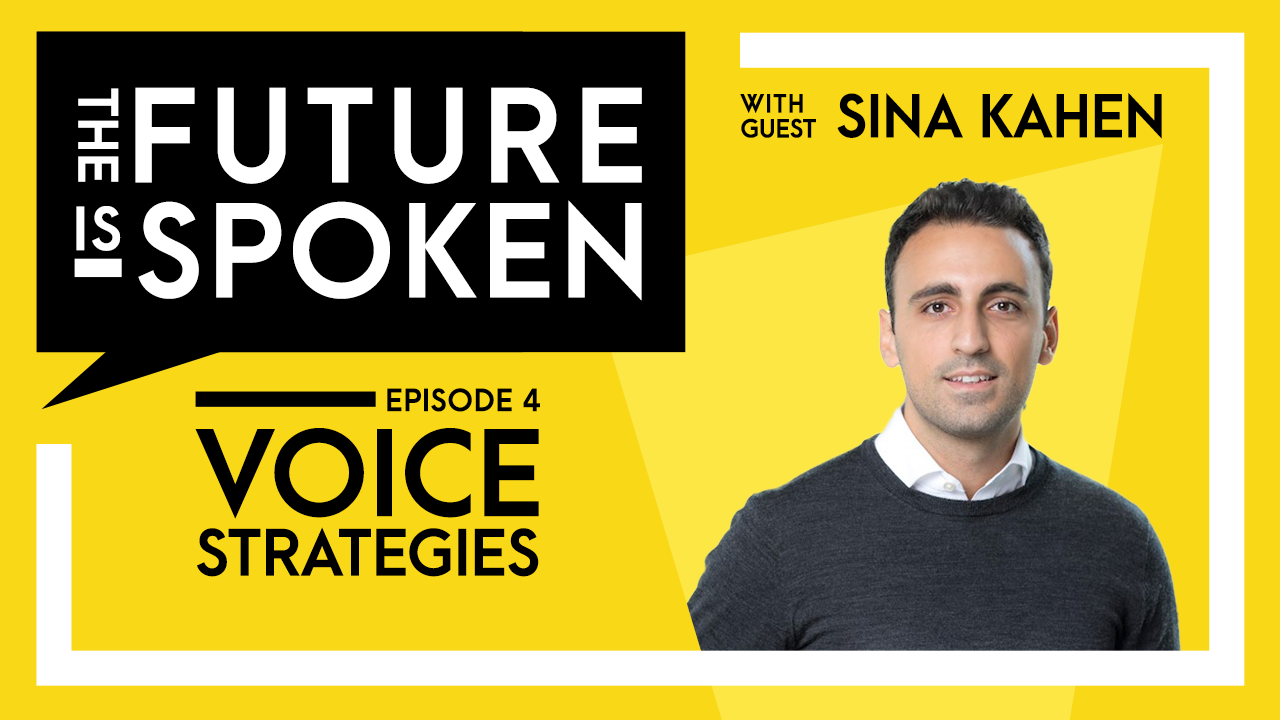 Sina Kahen is a positive and energetic guy.

Only once during his podcast interview does he express exasperation. And that’s when he thinks about businesses wanting a chatbot or voice interaction interface without considering the reasons why.

Sina is a voice strategist and owner of voice strategy consultancy Vaice. Based in the U.K., Sina is big on understanding the ‘Why’ behind a business's desire to implement a voice interface.

Voice interfaces aren’t the cure to everything

“Some businesses do think that voice is the cure to everything,” he observes.

Sina says that many businesses think this way because the voice community initially pushed the voice-first message. Not web first, not mobile first, but voice first.

“That message put the expectations really, really high, and it made a lot of companies think that (voice) can do everything.

“But actually, voice ended up being just like the microwave, a part of the kitchen, but not the core,” he says. “Voice is definitely an element, an interface that you can interact with for certain things, and that doesn't diminish the value of it.

“The broadness of something doesn't give it a value. It's really the utility and the value that it provides for a specific thing can be enough. And that's why I like to push the idea of convenience first when I'm speaking with clients, not voice first.”

Most voice designers approach their work this way. They want to know at what stage the customer is at in the customer journey. From there, a voice designer looks at the most convenient touchpoint for that customer: is it voice, is it mobile, is it coming into a store, is it picking up the phone, is it web?

“It's just not using the technology for what it is. That's not what it's designed to do,” notes Sina.

Determining the need for a voice interface

Sina explains that when Vaice works with a company on the creation of a chatbot or voice interface, it begins with a discussion about why the brand might consider using voice technology.

“Brands are being exposed to so many technologies today,” he observes. “Our starting point is looking at a brand’s customer journey and helping them understand what voice might be able to do for them.”

Consultants at Vaice begin getting to know a brand before voice is even discussed as a possible solution.

A key way of determining whether voice is a good fit for a client is by looking at the level of involvement a consumer might have with a service or product.

For example, a service such as insurance is a high-involvement purchase for most people. A customer usually needs a lot of information and has questions before buying insurance. So they will want to speak to a human, not a voice interface. If a voice interface is involved with this purchase, it’s only at the beginning, possibly directing a customer to making a call.

On the other hand, buying a probiotic could be suitable for a voice interface. A consumer is able to answer a series of questions about symptoms or issues, and be directed to a product they may want to purchase.

When it's been determined that there is a need for a voice interface, Sina will get together with other strategists and work on coming up with a good idea for the voice interface.

That idea is passed on to a developer. They will take into account the level of involvement with a product, and role-play at different parts in the customer journey, determining what customer interactions exist at a given point in the journey.

“Given the experience that we have with voice and the utility that we know voice can provide, we start coming up with ideas for a voice application or a voice-based feature at a given stage for that brand,” explains Sina.

That’s when we really start pitching the ideas to the brand. And once they're happy with the idea, then when we go into design and development.

Sina goes back to the probiotic example of a probiotic company, something Vaice worked on recently.

“One of  the challenges with the probiotic industry is that there are so many different types. People don't really know which ones are good for what kind of situation that you're trying to solve internally,” he explains.

So one of the things Vaice did was create a question and answer environment within the voice application, where the user activates the brand's voice application on a voice assistant. The app then asks a series of questions about the person to get to know the person.

Then the voice interface will give recommendations and link to the ideal type of probiotic, given their priorities and preferences.

With this type of set up, a business can tie in things like sending samples, or go straight to purchase. If a customer’s Amazon pay account or Google Pay account is connected, they can go ahead and make the purchase.

“The idea is really like a recommendation service, because a lot of people may not even think of going to a pharmacy to go and ask for the type of probiotics they want, or they may feel uncomfortable speaking about internal issues with someone in a pharmacy,” explains Sina. “

“So having that in the privacy of your home, where you say exactly the problems that you're having, and having that recommendation service there, is something that we saw gained quite a lot of interest by users.”

Ultimately, Sina says that we all need to remember that a voice interface is there to remove friction, add a bit of personality to content, and all in all provide a personable experience when people are interacting with our technological interfaces.

“Technological interfaces have impacted out mental health to such an extent that having a voice associated with them might improve our mental states,” concludes Sina.