Curiosity is key to success in conversational design 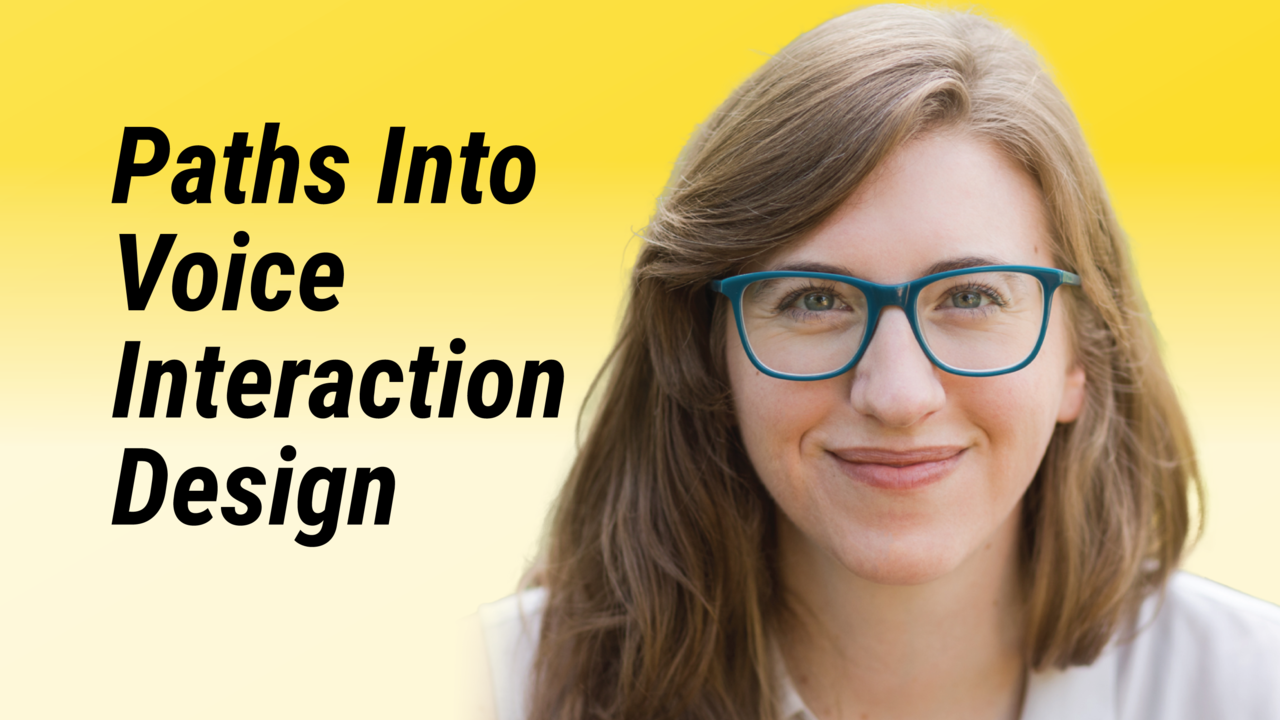 If you have a left-brain-right-brain thing happening, a way of thinking that allows you to engage creatively and logically - chances are you will excel at conversational design, also known as voice interaction design.

Many people who enter that conversational design have the advantage of left-brain-right-brain thinking, although this isn’t essential to succeed in this field. .

“Be curious and be interested in teaching yourself,” she says.

Be curious and love learning

In a recent podcast interview, Rebecca said: “An example of that is I don’t have a linguistics background. I never studied it, but it’s really important to understand how people talk to each other, so that’s something I have studied on my own.”

Rebecca’s career in voice tech began with a plane trip from Kansas to Florida in 2010. She sat next to someone who was launching a healthcare start-up and they were working on a conversation training interaction project. Its aim was to teach nurses how to have interviews with patients.

“They needed a writer for the work, and I ended up working for them for five years,” explains Rebecca.

That’s how Rebecca entered conversational design. The role expanded from looking at dialogue to looking at training data and looking at the information architecture experience. She also examined student transcripts which were the actual student interactions with bots.

“It included a lot of work in user research and user experience, so it really was a five-year experience in voice interaction design,” she notes.

Keep the user in mind

“That skill carries right over into what we do in conversation design, which is trying to maximize the chances that our user is going to understand what's said to them and be able to respond intuitively,” explains Rebecca.

Rebecca notes that as a conversational designer, a writer can really get into a flow, “but I do think that there is that is the analytical component, even if you write creatively, you are still using an analytical part of your brain at the same time.

“I do think many writers keep the concept of a reader, a user, if you want to keep using that metaphor, that connection, a lot of times, they keep the reader in mind,” she continues.

“Some fiction writers even imagine a specific reader that they're trying to communicate to. So I think that that mindset absolutely goes into when you're writing prompts for a conversation and you're thinking about serving this other person or working on their terms and understanding about them.”

While working on the conversation training interaction project, Alexa was released. Then, Google Home shortly hit the market, and it became such a need to start developing a company's voice presence, their voice interface. Chatbots had a big upswing in customer service applications.

“I realized that I sort of accidentally acquired this very high demand set of skills, and I started doing a little freelance for a different tech company, and from there kind of segued into working full-time for a digital agency as their first conversation designer.

Working in conversation design is enjoyable for most people, says Rebecca. There is a sense of inclusion and community that is missing from many other fields. Of course, there are challenges, too.

Educating clients is an important part of a designer’s work. Rebecca explains that many clients think that the technology is further along than it is.

“People in the industry often send the message that the future is now, and actually a lot of the tech is still probably not as robust as we would imagine it to be,” she says. “So educating clients on what's achievable today and how we get to the future is important.”

A second challenge is that clients often expect processes to move forward quickly. To their mind, there doesn’t appear to be much to build. There's not an interface that you can see, and this creates a natural misconception that just a little bit of code is required.

“This isn't the case at all. There's a lot of design and code that go into trying to replicate the human brain and its ability to talk to you,” explains Rebecca.

However, despite these challenges, Rebecca loves her work and describes the people as very cool.

In fact, she says that her relationships with coworkers and being able to work alongside very smart and creative people is always very exciting.

“And I'm talking specifically about the developers that I worked with,” she adds. “A lot of people think that developers aren't creative people, but that's not true at all. And there's also the misconception that developers have poor communication skills, that's also not true. So the team collaboration on any project was usually the highlight.”

Working for the likes of Amazon or Google means that communicating with internal stakeholders is also huge. Rebecca recommends a book called Articulating Design Decisions for this kind of work; it’s very useful in going through the best ways to communicate about design work to get the kind of feedback that you need at a certain stage. Feedback is a huge part of design work, as is explaining ideas.

Rebecca is currently working on a book called Conversations with Things, with co-author Diana Deibel, who's also a conversation designer. It’s about user experience, design, and how it looks when you're designing for conversational interfaces.

You can listen to Rebecca’s full interview here.